Civil War Journal of a Union Soldier was edited and published this year by P.C. Zick, great-granddaughter of Harmon Camburn, a sergeant in the Second Michigan Infantry from 1861-1864. 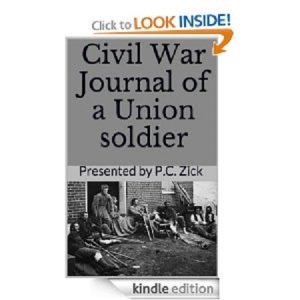 Harmon Camburn gave the strongest years of his youth and lost his health in the war between the states. He enlisted at age 19, was made sergeant, survived marches, privation, battles, injury and capture, and was discharged with a wounded lung in 1864.  He wrote the journal years later, at the request of his children, from a diary he kept throughout that time. He tells about his part in the war with dispassion and no praise for himself, but it’s plain he was a remarkable young man, dependable, resourceful, loyal, cheerful, and humane. His journal praises those traits in others.

I couldn’t follow all the maneuvers of the Second Michigan, but I got a clear idea of how much territory the army covered, a year or more in Virginia, advancing and retreating, then traveling down the Ohio and Mississippi as far as Vicksburg. Camburn records many “incidents” that broke the tedium of winter months when the army was confined to camp, and shows how both sides impoverished the places they fought over.

The journal grows most dramatic and also shows the great stresses on the army and civilians in the last chapters that describe the siege of Knoxville, Tennessee. By its end, I wondered again why humans ever think it’s necessary to destroy each other, and how they manage to survive.

It will be for historians to decide if the journal contributes important detail to our understanding of the Civil War. I’m certain it will appeal to re-enactors and others interested in the daily life, toils, and dangers for soldiers and civilians of the period.

Thanks to Camburn’s family for preserving his handwritten journal, and to P.C. Zick for editing and making it public. The book is available from Amazon in print and ebook.

2 thoughts on “The Remarkable Journal of a Union Soldier”