I’ve often thought our middle school years set our preferences. For example, I never lost my middle-school love of music, though I’m glad to say that due to a kind of forced immersion, some of my tastes have changed. As a kid, I liked classical music and tunes that made the Hit Parade, but nothing that featured a guitar. Even as recently as fifteen years ago, when I heard a recording of Bill Monroe’s voice, I wanted to cover my ears and run from the room.

I think it’s true that that if you study something (or hear it all the time, as I had to listen to old-time and bluegrass music when my husband was learning to play mandolin) you may develop an appreciation for it. But the first time you listen, view, or read something different can produce culture shock.

If my newest novel, Ridgetop, included a sound track, it would be a background of country and bluegrass music, not just because I like it and because this music is part of the culture of the mountains, but because the story includes musicians and a music festival.

One of the old songs referenced is “Way Down the Old Plank Road.” You can listen to an old recording by following the link below. The words are indistinct, but I’ve included them at the end.

I’ve read that the plank road in this song refers to a specific road to jail, evidently a bumpy, miserable ride. Starting in the 1800s, plank roads were constructed throughout America over terrain like swamps and deserts, primarily for freight wagons. And maybe to carry men to jail.

Here is Uncle Dave Macon’s recording of “Way Down the Old Plank Road.”

This style of music may be a taste you have not yet acquired. Let me know. 🙂 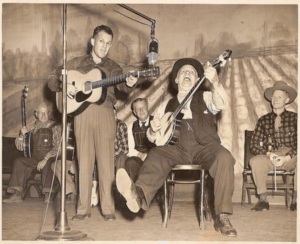 Way Down the Old Plank Road

I’d rather be in Richmond in all the hail and rain
Then to be in Georgia, boys, wearing that ball and chain

I went down to Mobile to get on the gravel train
Very next thing they heard of me, had on the ball and chain

Doney, oh dear Doney, what makes you treat me so
Caused me to wear the ball and chain and now my ankles sore

Knoxville is a pretty place, Memphis is a beauty
If you want to see them pretty girls, now hop to Chattanoogie

My wife died a Friday night, Saturday she was buried
Sunday was my courting day, and Monday I got married

Eighteen pounds of meat a week, whiskey here to sell
How can a young man stay at home, pretty girls look so well

Lyrics from the ToneWay Project:http://toneway.com/songs/way-down-the-old-plank-road#ixzz3biwupQBt

6 thoughts on “Way Down the Old Plank Road–”